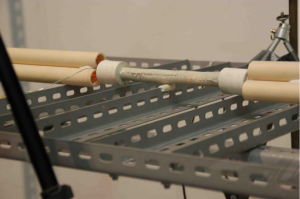 The reactor used in the test is made of alumina and is significantly thinner than earlier hot E-Cat reactors.

A new scientific report on the E-Cat has been released, providing two important findings from a 32-day testrun of the reactor — together leading to the clear conclusion that the E-Cat is an energy source based on some kind of nuclear reaction, without radiation outside the reactor.

The first finding is an energy release which puts the reactor way beyond conventional (chemical) sources of energy.

The second is a dramatic shift in isotopic composition in the fuel after the testrun, meaning changes have occurred in the atomic nuclei of the elements present in the fuel.

The report is entitled “Observation of abundant heat production from a reactor device and of isotopic changes in the fuel” (Download here) and is written by Giuseppe Levi, Evelyn Foschi, Bo Höistad, Roland Pettersson, Lars Tegnér and Hanno Essén, all of whom also wrote an earlier third party report on the E-Cat.

In the concluding remarks they write:

“In summary, the performance of the E-Cat reactor is remarkable. We have a device giving heat energy compatible with nuclear transformations, but it operates at low energy and gives neither nuclear radioactive waste nor emits radiation. From basic general knowledge in nuclear physics this should not be possible. Nevertheless we have to relate to the fact that the experimental results from our test show heat production beyond chemical burning, and that the E-Cat fuel undergoes nuclear transformations. It is certainly most unsatisfying that these results so far have no convincing theoretical explanation, but the experimental results cannot be dismissed or ignored just because of lack of theoretical understanding.”

The authors are very careful not to make any decisive conclusions on how the reaction occurs. Yet, they make some interesting remarks, among them considerations on similarities with observations in astrophysics.

Without any optimization with regard to input power, the reactor produced between 3.2 and 3.6 times the input power, and a total energy of 1.5 MWh from about 1 gram of fuel. The reactor was switched off according to plan, with no signs of the reaction slowing down. As I point out in my book An Impossible Invention — an energy source of this kind will have huge consequences for humanity, possibly solving a series of global issues.

In order to avoid doubts that were presented with regard to their earlier report, several things have been changed: The measurement was performed during 32 days in a neutral laboratory in Switzerland, electric measurment on the input power has been improved, a 23-hour test of the reactor without charge was done in order to calibrate the measurement set-up, and chemical analysis of the fuel before and after the run has been performed with five different methods.

The report has been uploaded to Arxiv.org which, however has put it on hold, without specifying any motive for this. It has also been sent to Journal of Physics D. I got the report sent to me by Hanno Essén who said that he now considers it to be public, although not supposed to be published in any commercial journal until further notice from Journal of Physics D.

I asked Professor Bo Höistad, one of the authors, a few questions on the report:

Mats: What do you consider to be the most important take-away of the report?

Höistad: That we have been able to do an isotopic analysis of the fuel before and after running the process, and that the results indicate the presence of nuclear reactions in the process.

Mats: What have you done differently this time, based on the experiences from your last measurement and report?

Höistad: An accurate measurement, particularly the control of energy balance without fuel in the reactor, and a isotopic analysis of the fuel.

Mats: What reactions do you expect on the report?

Höistad: Hopefully that the interest in the possibility of achieving LENR reactors get a decent boost, and that critical overtones in the debate are downplayed in favor of scientific discussions.

Mats: What do you personally feel facing the inexplicable observations you have made?

Höistad: As pointed out in our paper, we face a phenomenon without explanation. However, we can not categorically reject the clear experimental results just because a credible theory is currently lacking. We need to relate to the actual experimental results and continue the investigations to gain more knowledge about the LENR phenomenon.