On January 31, 2019, inventor and entrepreneur Andrea Rossi will hold an online presentation on the commercial launch of his heating device, the E-Cat. Thereby, the moment of truth is approaching for the carbon free, clean, abundant, cheap, and compact energy source that could potentially replace coal, oil, gas, and nuclear, and also solve the global climate crisis.

Since I started reporting on Andrea Rossi’s E-Cat technology in 2011, he always told me that his main goal, and the only thing that would convince people about the controversial physical phenomenon it was built on, would be to put a working product on the market.

Now, eight years later, after events taking unexpected and amazing turns which I told in my book An Impossible Invention and in this blog, Rossi claims to be ready to do so. His plan is to sell heat from remotely monitored devices at a price per kWh 20 percent below market price, with no carbon emissions from the operation of the devices.

(Note: The business model of selling a service rather than a product is a strong megatrend driven by digitalisation and by internet of things, making remote monitoring more effective, and it is already used by e.g. Rolls-Royce and GE, selling flight hours rather than aero engines).

While this already implies a substantial cost-saving for the customers, it is most probably only the start of what the E-Cat technology can provide ahead, if it works as claimed.

At the online presentation (more info at http://www.ecatskdemo.com) (UPDATE: Press release here), Rossi plans to show a two-hour video of a device already in operation, reportedly heating an industrial premises of about 250 square meters in the US to 25°C since Nov 19, 2018. At the presentation, he will provide details regarding the commercial launch, but here is what I have been told and what I have concluded so far:

Lately, I have reported little on the E-Cat, simply because there has been essentially no new information that could be confirmed. Also in this case, in theory we will not be able confirm any of the claims presented, specifically since the existing customer will not be disclosed at the presentation on Jan 31, as far as I know.

But let’s assume that the there’s no working E-Cat device. Then either Rossi is fooling himself, and there’s nothing that makes me believe this now, or it’s a fraud, which hardly makes any sense at this point.

In the fraud case, the E-Cat SK would be an electric heater consuming as much power as it outputs. But after at least a decade of hard work, without asking money from any third party, having earned USD11.5M from his ex US partner Industrial Heat, why would Rossi get back now and sell heat at a loss? To a customer that would immediately discover the fraud by looking at the electricity consumption of the device?

Clearly, only when at least one customer, having used the heat from the E-Cat SK for some time, will speak publicly about the service, the moment of truth will arrive.

Meanwhile, everything else that I have observed and witnessed during these eight years, including my own measurements on the previous E-Cat versions, and the one-year test of a one megawatt plant in Doral, FL, during which Rossi started developing the E-Cat QX with its electronic/electromagnetic control system, indicates that the E-Cat is a working device, although many would call it An Impossible Invention.

By the way, I would like to share my impression that the groundbreaking control system of the E-Cat QX and the SK, is the result of a kind of dreamteam consisting of the genius Andrea Rossi, with elusive and creative ideas about physics and about what he thinks could be possible, and of electric engineer and computer scientist Fulvio Fabiani, not only being an expert on electronics but also being capable of interpreting Rossi’s wild and hard-to-grasp ideas, transforming them into real electronic circuits actually performing the job Rossi had in mind. 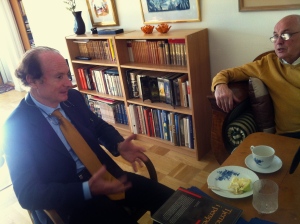 I will develop this story further in the updated third edition of my book, which I hope to be able to conclude within a year or so, once the moment of truth has arrived.

And when the moment arrives, the E-Cat technology will most probably start providing clean, cheap, abundant, and sustainable energy to everyone in the world, in combination with solar and wind (which are a long way from replacing fossils on their own, and furthermore also require problematic large scale world-wide chemical battery implementations for energy storage).

Until then, the champagne remains on ice. And when I open it, I will be thinking of Sven Kullander and of late Prof. Sergio Focardi who played a fundamental role, helping Rossi to develop the E-Cat technology.