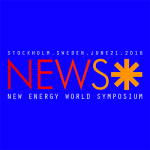 It is with deep regret that I must announce the cancellation of the New Energy World Symposium scheduled to have taken place in June in Stockholm.

As initially communicated, the Symposium was conditioned by the report from the one-year 1MW test undertaken by Rossi and Industrial Heat, IH. However, with the ongoing lawsuit by Rossi on IH, the report is not expected to be released anytime soon, and therefore the Symposium can not be held as initially planned.

Let me also point out that until there is such an independent report, based on generally satisfactory measurements, I would not consider the E-Cat, on which the 1MW test was based, a confirmed LENR technology.

In this situation, I have discussed holding a repurposed event based on the increased and most interesting activity in the LENR field in general, but I have found that I will not be able to organise this in time.

On the other hand, I hope to be able to propose a new event on LENR based technologies further ahead and will keep you updated.

I would like to thank the highly qualified speakers who were planned to participate at the Symposium, for their enthusiasm and for their willingness to contribute with their valuable experience and competence. Over 270 attendees decided to pre-register for the event, which I believe is an indication of the value that the speakers’ mix of ideas, models and thoughts would have offered.

A great thanks also the the Symposium’s partners, Kairos Future, E-Cat World, Network Society and Lenria.

Any inconvenience to attendees of the Symposium is deeply regretted.