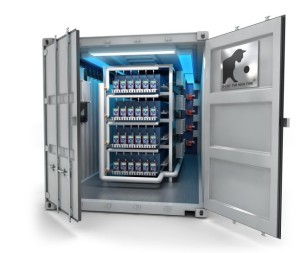 Drawing of the 1MW plant.

On February 17, 2016, a 350-day commercial test of a one megawatt heat plant based on Andrea Rossi’s E-Cat was completed. The event must be considered historic since it’s the first time an industrially useful amount of energy is produced over such a long time from this kind of yet unexplained radiation-free nuclear reaction—LENR or Low Energy Nuclear Reactions.

To be clear, the report from the one-year trial, which has been controlled by a major independent third party certification institute, will be released only in about a month or two, and until then no official information is provided on the test result. However, multiple sources have told me that the test has been successful.

Earlier, some sources having visited the test plant told me that the COP, Coefficient of Performance, i.e. the ratio between output power and input power for control, was in the range 20—80, meaning that the heat plant was consuming 12—50 kW while producing 1 MW—the average consumption of about 300 Western households, including electricity, space heating, water heating and air conditioning.

I have also been told that the total amount of fuel—mostly harmless elements such as lithium, hydrogen and nickel, according to Andrea Rossi’s granted patent on the technology—was in the range of tens of grams. And supposedly the charge has never been changed during the year. On the other hand, after one year’s run, the reactors are now being recharged for further operation.

All this might be confirmed by the third party institute, that has been controlling the heat plant 24/7 with video cameras.

The test has been undertaken by Andrea Rossi and his US industrial partner Industrial Heat, and according to Rossi, commercialisation of similar industrial heat plants will be initiated as soon as possible, provided that the result is positive. Industrial Heat has acquired the right to produce and sell E-Cat based technology in, as far as I have been told, North, Central and South America, China, Russia, Saudi Arabia and the United Arab Emirates.

Needless to say, the consequences of such an energy source for the world will be huge. And the consequences for industry, finance and society is also the focus of the New Energy World Symposium or NewS, which will be held in Stockholm, Sweden, on June 21, 2016, provided that the report from the test is clearly positive.

So, now we all wait for the report. Personally, however, I will put the champagne on ice. Now.