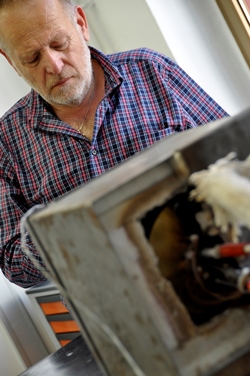 The measurement setup that was used by Defkalion Green Technologies (DGT) on July 23, 2013, in order to show in live streaming that the Hyperion reactor was producing excess heat, does not measure the heat output correctly, and the error is so large that the reactor might not have worked at all.

This is the conclusion of a report (download here) by Luca Gamberale, former CTO of the Italian company Mose srl that at that time was part of the joint venture Defkalion Europe, owned together with DGT.

The report is based on experiments, performed mainly after the live streaming, using the same setup but without the reactor being active. Yet, the experiments showed that it was possible to obtain a measured thermal power of up to about 17 kW, while the input electric power was about 2.5 kW.

I asked Gamberale if this erroneous result could have been present without DGT realizing it.

“To obtain this effect it’s necessary to operate two valves in a certain way, so you need to have the intention to do it,” Gamberale told me.

Those of you who have read my book ‘An Impossible Invention’ know that Defkalion was an early partner to Rossi, supposed to build applications using Rossi’s reactor as a heat source. When Rossi ended the agreement with Defkalion in August 2011, Defkalion stated that operations continued, and later Defkalion claimed to have developed its own similar technology, producing heat from a reaction involving nickel and hydrogen.

Test results and measurement data were never disclosed, but in July 2013 Defkalion finally decided to make a public demo, live streamed during the cold fusion conference ICCF 18. I was present at the demo on July 23 in Milan, Italy, and referred my impressions in two blog posts here and here, trying to be as objective and neutral as possible, since I believe that my readers should draw their own conclusions.

“If you believe the values presented…”, I wrote, and that was also the main problem. It was not easy in a short time frame to verify possible errors or hidden mechanisms, specifically since Defkalion didn’t accept changes in the setup, and therefore it was not evident that you should believe the values. I reported them as presented though.

Gamberale describes in the report that before the demo, Mose had proposed a series of improvements to the measurement setup in order to make it more reliable but that DGT did not allow these changes. He notes that the lack of cooperation made it necessary to carry out independent verification tests.

The tests focused on a possible malfunction of the digital flow meter used to measure water flow in the setup. It was shown that by decreasing the input water flow to almost zero, the flow meter started to make fast movements back and forth, and since the direction of the flow was not registered by the flow meter, these fast movements resulted in a reading corresponding to a relatively high flow, although the flow was almost zero.

The explanation is thoroughly discussed in the report. Most important, however, is the fact that Gamberale with the experiment has proved that the setup could produce readings of large amounts of excess heat, without the reactor running, and that any result from the setup showing excess heat therefore is unreliable.

Gamberale explained to me that he presented these findings to Defkalion’s president Alexander Xanthoulis, and to Defkalion’s engineer Stavros Amaxas who was operating the setup at the public demo.

According to Gamberale, Xanthoulis said “Ok, we don’t know, this could be possible, but in any case we are sure that the reaction exists”.

Gamberale described Amaxas’ reaction to be much stronger. Defkalion’s CTO John Hadjichristos was not present at that meeting.

In his report, Gamberale also notes that Mose srl has given DGT some time to provide evidence that its technology is real, despite the findings presented, but that after several months, no answer has been given.

As I write in my book, Gamberale and the president of Mose srl, Franco Cappiello, who told me that he had invested €1 million in the joint venture, decided to put all commercial activity on hold until Defkalion could carry out a measurement that dispelled their doubts. They later closed Defkalion Europe altogether.

I called Alexander Xanthoulis and asked for a comment. He didn’t dispute the result of the report but pointed out that the calorimetric set-up at the Milan demo was not made by Defkalion but by Mose. Gamberale confirmed this but explained that the set-up was made according to strict instructions from Defkalion, and that when Mose added some component, such as another independent flow meter or another method for measuring thermal heat output, these additional components were immediately removed by Defkalion personel without discussions.

Xanthoulis also said that he didn’t understand why Gamberale hadn’t asked these questions earlier during months of contacts and visits by Mose at Defkalion’s offices in Canada, and by Defkalion in Milan. Gamberale explained that he had tried to get the information he needed but that he was never allowed to make the measurements he asked for. Instead he described his role as one of an observer.

Finally Xanthoulis pointed out that the flow calorimetry measurements (measurement of thermal energy output by heating flowing water) were not important, but that the most important measurements were on the bare reactor, calculating the output thermal energy by measuring temperatures on various points of the reactor without heating any water (you then use a law called Stefan–Boltzmann law). He told me that these measurements had been sent to Gamberale twice.

“He sent an Excel spreadsheet with no explanation including a couple of incomprehensible graphs in which it was not even written what it was about. I felt almost offended. I’m asking a justification of an abnormal result regarding a claim of a nuclear reaction that would change the history of the world, and I get an Excel sheet without any specification of what it is,” Gamberale commented.

I got the spreadsheets from Gamberale. They contain temperature measurements in degrees Celsius on various points of the reactor and can be downloaded here (sheet 1 and sheet 2). I know they are accurate since Xanthoulis sent me one identical document, asking me not to publish it.

I have studied Gamberale’s report and I find it both detailed and convincing. It should make Defkalion’s case difficult.

Gamberale doesn’t accuse Defkalion openly for fraud, but he makes it clear that the Milan demo presented no evidence that the technology is working.

The doubts I have had towards Defkalion, described in my book, are obviously increased through the report. Some wondered about the uncertainty regarding Defkalion’s technology that I expressed recently in an interview by John Maguire at Q-niverse. One important reason was Gamberale’s report, which I had already received by then.

And while I write in the last chapter of the book that it’s hard to assess Defkalion, but that if its claims can be trusted, Defkalion might have made ​​the most progress among those working with LENR technology based on nickel and hydrogen, I now find it less likely.

Alexander Xanthoulis still claims, however,  that the development of the new reactor is on track and that according to the plans it will be certified with regard to safety and security by a Canadian certifying body corresponding to US Underwriters’ Laboratory within the next months. After that, Defkalion could start licensing the technology to partners. National licenses were previously offered at EUR 40.5 million, and though Xanthoulis told me that five contracts have been signed he also said that no money had yet been transferred.

But Defkalion will now have to present solid evidence to convince anyone that its technology is valid, and also let those people make changes to the test protocol and to the measurement set-up, if it’s necessary in order to eliminate uncertainties.

Gamberale told me that the findings he describes in the report could bring damage to serious research activities within LENR, but he also told me that he personally still believes that LENR is an important scientific and technological area and that he is getting involved in two other projects in this domain.

The magazine Infinite Energy has released an issue featuring comments on the book ‘An Impossible Invention’ by researchers, experts and Nobel Laureate Brian Josephson. Plus an interview with me. Read more.

John Maguire at the blog Q-niverse has published a streaming audio interview with me regarding the book. Listen here.